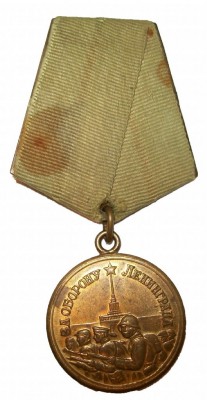 Medalj Defence of Leningrad CCCP WW2 original Äkta rysk medalj från WW2 Utdelad till de som höll Leningrad Med rejäl WW2 patina. Established 22 December 1942. Awarded to all servicemen of the Soviet Army, Navy, Ministry of Internal Affairs, and civil citizens who took part in the defense of Leningrad.The famous siege of Leningrad lasted for 900 days, beginning 8 September 1941 until 27 January 1944. German forces blockaded the city in an attempt to starve the resistant inhabitants into submission. Famine was rampant. Despite being outnumbered in weapons and men, Leningrad defenders fought building to building under heavy artillery fire and air bombardment. Soviet fighters began an offensive on 14 January 1944, and the blockade of the city ended on 27 January 1944. Leningrad was awarded the Title of "Hero City" on 1 May 1945, and is one of only four "Hero Cities" in the USSR (the others being Sevastopol, Stalingrad, and Odessa.) It is made of brass. Approximately 1,496,000 were issued.