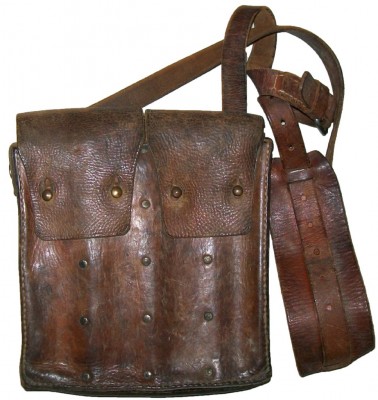 Ammoväska K-Pist M45 Carl Gustav Sverige Äkta kronmärkt original. Komplett med lilla hållaren för mörkersiktet på sidan. RARE: complete with night-vision/ sight leatherpouch on the side. Battle worn/ Soldier issued! "During the Vietnam War, the US Navy SEALs used the Carl Gustav m/45 SMG extensively. One of the guns qualities, which appealed to the Navy was that the m/45 can fire almost immediately out of the water (over the beach). It also saw use by CIA operatives and advisers. In US service it was largely known as the "Swedish-K" or "K-Rifle". The US Navy was so impressed by the m/45 that when Sweden embargoed the export of weapons to the USA in 1966, Smith & Wesson was given the task of producing a copy. This was designated the Smith & Wesson M76. However, by the time when the M76 was ready for combat deployment, the US Navy had ended most SEAL missions in Asia."