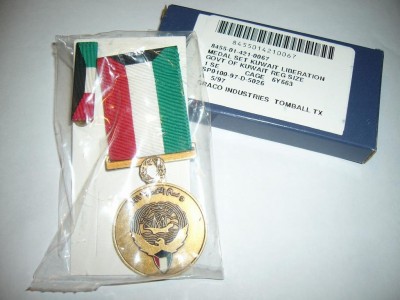 Kuwait Liberation Gulf War medalj + släp i ask Fullsize medalj med tillhörande ribbon. I originalförpackning! Awarded to members of the Armed Forces of the United States who served in support of Operation Desert Shield or Desert Storm in one or more of the following areas between 2 August 1990 and 31 August 1993: • Arabian Gulf • Red Sea, Gulf of Oman • Gulf of Aden • That portion of the Arabian Sea that lies north of 10 degrees North latitude and west of 68 degrees East longitude • Total land areas of Iraq, Kuwait, Saudi Arabia, Oman, Bahrain, Qatar, and the United Arab Emirates. To be eligible, a service member must have been: • (1) attached to or regularly serving for one or more days with an organization participating in ground/shore (military) operations; • (2) attached to or regularly serving for one or more days aboard a naval vessel directly supporting military operations; • (3) actually participating as a crew member in one or more aerial flights directly supporting military operations in the areas designated above; • (4) serving on temporary duty for 30 consecutive days or 60 nonconsecutive days. These time limitations may be waived for members participating in actual combat operations The person's conduct, while in captivity, must have been honorable. This medal may be awarded posthumously to the surviving next of kin of the recipient.