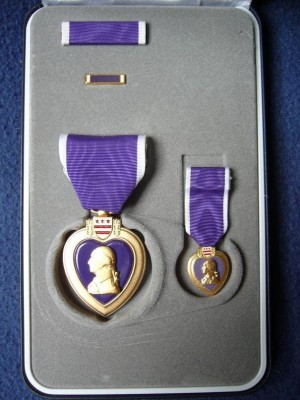 Purple Heart Medaljset x4 Medaljset i utdelningsasken. De-Luxe US goverment issue, långa lådan! Unissued. The prestigious Purple Heart Goes bach to the very beginning of the United States as we know it today, it was 1st awarded back in August 1782 which was then a purple embroidered cloth with lace on the edge only 3 NCO's are thought to have received this award. The 1st recipient of the award as we know it was in 1918 & was awarded to General MacArthur...This award until the 2nd World War was only for Army personnel. In August of 1942 under President Roosevelt Executive order no..9227 it was made available to all Forces. Due to U.S.Policies imposing the "Stolen Valour Act" In December of 2006 this medal is becoming quite a Rare piece for serious collectors.