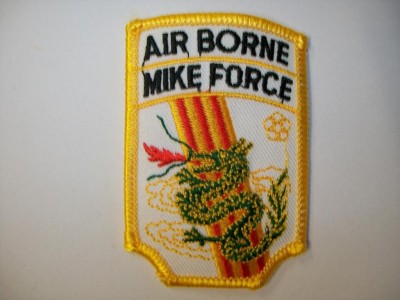 Mike Force Airborne Tygmärke SOG Vietnam Ca 7.5 x 5cm The Mobile Strike Force Command, or MIKE Force, was a key component of United States Army Special Forces in the Vietnam War. They served primarily with Montagnards, comprised of the best special soldiers selected from the persecuted Degar, Bahnar, Hmong, and Jarai people, who from 1960 to the egress of the United States from Vietnam waged special warfare against the Viet Minh, NLF (Viet Cong), and PLAVN (North Vietnamese Army) oppressors in various detachments. The MIKE force had a critical role in the search and rescue of downed American pilots in Viet Nam because of their primary mission. MIKE Force's primary mission was to call in air strikes on high value targets from behind enemy lines. Secondary missions of MIKE were [recon], search and rescue, and collection. The conventional unit alternative was Tiger Force, which was primarily tasked with counter-guerrilla warfare against enemies from behind their lines, rather than calling in air strikes, SAR, and collection.